Susan Davis and Elizabeth Perry were both 19 years old when they went missing in 1969. The two girls were friends, and had both recently graduated from junior college and wanted some sun and fun, so they traveled together to Ocean City, NJ for the weekend. As their vacation came to an end, they decided to get an early start heading back home to Pennsylvania. They ate breakfast at Somers Point Diner before heading North on the Garden State Parkway. The two girls never made it home. Their parents notified authorities on the night of May 30, 1969.
Three days later, on June 2, 1969, a maintenance worker that went by the name of Elwood Faunce, discovered two bodies in a wooded area alongside the northbound lanes of the Garden State Parkway, between milepost 31.8 and 31.9. The crime scene was located in Egg Harbor Township, which is just outside of Ocean City, and 2 miles from the Somers Point Diner, where the girls were last seen just after sunrise on May 30.
Susan had been driving a light blue Chevrolet Convertible, which was found on the side of the parkway, about 200ft from their bodies.
Both victims were discovered concealed with leaves and twigs, and both had been stabbed with a sharp instrument, thought to be a pen knife or a paring knife, about 4-5 times in the upper chest and neck region. Each victim had been beaten severely. Susan was found completely nude and lying facedown. Her neck was tied to a tree with her bra. A different source states the bra had been tied into her hair. She died of a wound to the neck that severed her larynx, and she was also stabbed on the left side of her abdomen and the right side of her neck. Her clothes, her blue jacket with her initials, a blue print dress and underwear were piled neatly beside her. Elizabeth was found about ten feet away, lying on her back. She was completely clothed, but her underwear was ripped/torn. She died of a chest wound that penetrated her right lung. She had also been stabbed in the abdomen. She had knife scratches on the side of her neck.
There was information about the crime scene that had been withheld from the public. Elizabeth was wearing expensive jewelry, which was found untouched, thus ruling out robbery as the motive. Both women also had cash in their purses, untouched.
The coroner was never able to determine whether a sexual assault had been perpetrated on either Susan or Elizabeth, due to the delay between when the girls were murdered and the discovery of their bodies three days later. They were in an advanced state of decomposition. However, the coroner did conclude that Susan and Elizabeth were murdered within 45 minutes of eating breakfast at the Somers Point Diner, due to the contents of their stomachs.
On May 30, 1969, the sun rose at 5:29 a.m, and both girls were seen in the diner at daybreak, and they had left the diner at around 6:15 a.m. Witnesses reported seeing a man with an arm sling in a dark colored Mustang parked near where Susan’s blue convertible was found. 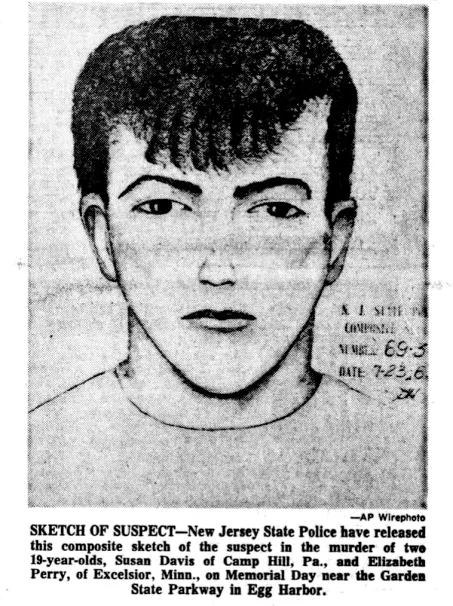 (Sketch of the person witnesses saw)

Detectives from the New Jersey State Police Major Crime Unit later questioned 3 young men from Pennsylvania who had pulled over onto the shoulder to sleep near milepost 31.9 after they ran out of gas, at about 4:30 a.m. They stated that when they woke up 3 hours later, they noticed Susans’ unoccupied Chevrolet convertible parked on the shoulder, approximately 100 yards in front of them.

SUSPECTS:
On two separate occasions, once in 1986 and in 1989, the notorious serial killer Ted Bundy hinted at his involvement in the murders of Susan and Elizabeth. During the year 1969, Ted had been living with his aunt in Lafayette Hill, outside Philadelphia, PA while attending Temple University in Philadelphia. During the weekends, he would often travel to New York City’s Time Square to watch the women in the area. He mentioned the winter of 1969 specifically in his interview, stating “After being more or less detached from people for a long period… I didn’t have any friends, didn’t go anywhere, just more or less had school and sort of entertained myself with the pornographic hobby, drove to the shore and watched the beach and saw young women lined up along the beach. You know, it’s like an overwhelming kind of vision. Eventually I found myself tearing around that place for a couple of days, and without really planning anything, picked up a couple of young girls. And ended up with the first time I had ever done it… this fear of getting caught. It’s an extraordinary trauma, you know. And then there’s, of course, the fear of detection and apprehension when you kill someone.” He did not mention the women by name.
In 1989, in his second interview before his execution, Ted Bundy returned to 1969 while speaking with a criminologist, Dorothy Lewis. “I went to Ocean City, New Jersey… and just hung on the beach, looking at the young women, trailing them around… I felt compelled to act out his vision.. I was just stalking around the downtown area of this small resort community and I saw a young woman walking along… I didn’t actually kill someone this time, but I really, for the first time, approached a victim, spoke to her, tried to abduct her, and she escaped. But that was frightening in its own way… I know that in Ocean City, I realized just how inept I was, and so that made me more cautious, and I didn’t do that again for a long time. It scared me, it really scared me.”
Obviously, Mr. Bundy traveled to and from Ocean City several times during the summer of 1969, which is where Susan and Elizabeth were spending their weekend. Apparently, however, the day after he spoke to the criminologist, he denied his involvement before dying in the electric chair. Ted’s aunt claimed during an interview that he had an alibi for the weekend of the murders.
Susan and Elizabeth may have been one of Ted Bundy’s first murders, however, there is no irrefutable proof of that. There are some who believe he may have actually committed his first murder in 1961, at the age of 14, when an 8 year old girl went missing in Tacoma, Washington. Ted spent much of his childhood there.
Another killer was also in the same vicinity at the time of the murders. His name is Gerald Eugene Stano. He also took credit for the killings, but there was no proof. Stano was convicted of killing at least 22 women in New Jersey, Florida, and Pennsylvania and claimed to have killed 41 women between 1969-1980. In 1982, he signed a confession to the murders, but later implied his confessions were coerced, and the information he gave to police did not add up. He was executed in Florida in 1998. He was known as a “serial confessor.”
There were several other suspects, including a man named Mark Thomas. Mark was a childhood friend of Gerald Stanos. An anonymous tip was received, and he was brought in for questioning. Unfortunately, there was no proof. Mark later became a visible figure in the Pennsylvania Ku Klux Klan and was involved in crimes all around the US.
A drifter named Ronnie Walden was also a suspect. He was traced to Atlantic City and elsewhere at the Jersey Shore at the time of the murders. A wrist watch found at the murder scene was linked to Walden by a woman who heard about the murders in the press and stated she had recently been on a date with Walden shortly before he drive up to New Jersey from the South and she had seen him wearing the watch. In a bizarre connection to Bundy, Walden was being held at the Garfield County Jail in Glenwood Springs in the same cell that Ted later escaped from in 1977, when he famously exited through the ceiling. Walden had attempted to hang himself at the jail in the hours before NJ State Police arrived to interview him. He passed a lie detector test and authorities stopped pursuing him despite incriminating evidence; The police found half a finger print of Ronnie’s on the girl’s car. He is also a schizophrenic and had spent time in a mental hospital. Walden was in and out of jail for the rest of his life for various crimes, including a shooting in South Carolina that landed him in prison in 1984. In 1989, he took his own life using a smuggled gun, which he used during a hostage situation involving a prison guard.
Research has pointed to Ronnie Walden as the suspect with the most corroborating evidence in the murders of Susan and Elizabeth. The Ted Bundy theory persists in part because of the lack of closure in the case. Elizabeth Perry’s mother, Margaret started, “We are convinced that when Ted Bundy died, our daughter’s killer got his comeuppance.”
Over 50 years later and NJ State Police are still hoping to determine who killed Susan and Elizabeth.