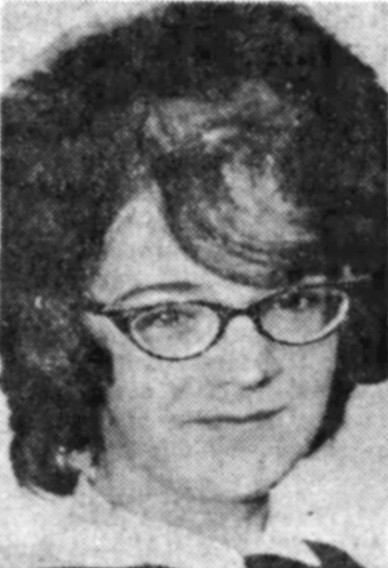 Catherine Baker was a 16 year old girl living at 48 Gurley Road in Nixon, Edison Township New Jersey. On Thursday, March 17 1966 at 7:00PM, Catherine left her home to go to the Edison Shopping Center on Woodbridge Avenue where she wanted to go into the local bakery to buy cupcakes for her mother. This was only located one block from her house. Witnesses place her in the area at about 8:50PM. This is the last time Catherine was seen alive. She was wearing a pink sweater with brown pants and a three-quarter length green suede jacket and glasses.
About two months later on May 14, 1966, Catherine’s body was found in Metedeconk River near Cook’s Bridge, Jackson Township by three boys on a fishing trip. She was nude from the waist down, but sexual assault was undetermined due to decomposition. It was also determined she was beaten on the head. It was estimated that Catherine was in that spot for about eight weeks.
August 13 1966, a man named Ivan Joseph Rule, age 18, residing at 102 Mill Road, committed suicide in his jail cell when he was detained for questioning. Ivan Rule had briefly dated Catherine Baker. Police found a letter written by Catherine to one of her friends in which she stated that Joe Rule threatened to kill her if she dated anyone else. It is theorized that Joseph Rule was not yet aware that he was being detained as a suspect in the Baker murder, and upon realization, he became distraught at the possibility of going back to jail. He then hung himself with his own belt which police failed to confiscate prior to locking him up in a holding cell.