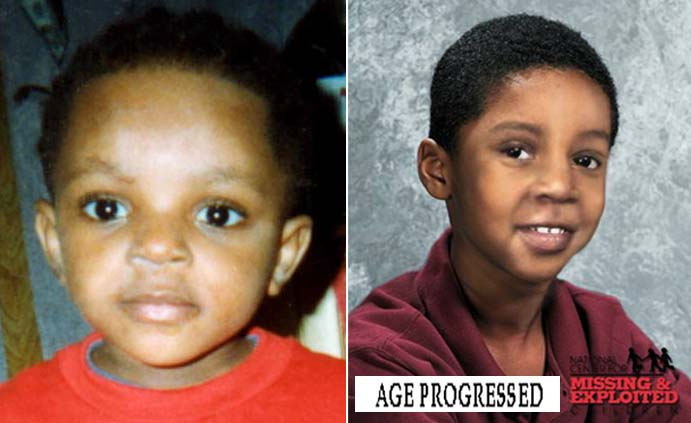 Jyrine Harris was last seen sleeping in his bed at home in Irvington, New Jersey at 1 a.m. on June 23, 2002. He was wearing only a diaper with Muppet characters on it. The 2 year old lived with his grandmother due to him being taken away from his mother, Janet Harris, on claims of abuse on May 31 of that year. There were 8 other people living in the house at the time. Jyrine has a rare disorder which causes brittle bones that break easily, and he had a fractured right leg with a cast on it at the time of his disappearance. He has previous fractures to his shoulder and his wrist. The cast extended from his knee to his toes, with writing on it that read “Get well soon fatboy.” He was given several nicknames in his life, such as “Fatboy”, “Fatman”, “Pooh”, and “Poppa Babba.”
Jyrine disappeared in the early hours of the morning while his teenage sister LaElisa Harris was watching TV downstairs with her boyfriend, Gregory Jones-McCrae. The family searched the house before reporting Jyrine missing to police at 5:00 a.m. His mother Janet was still in police custody at the time her son went missing. The charges against her were dropped, as it was determined that Jyrine could have sustained his injuries as a result of his bone condition rather than abuse.
Police do not believe Jyrine was taken by either of his parents but it is also unlikely that he wandered away from home due to the limited mobility he had from the fractured leg. Jyrine’s 4 year old cousin that shared a bedroom with him, says a Caucasian man and an African-American man abducted the child.
The sister’s boyfriend, George Jones-McCrae has not been cooperative in the investigation.
Janet strongly believes there was some kind of an accident in the home and Jyrine disappeared as a result.
Most of the people who were in Jyrine’s house who were there the night he vanished have not been ruled out as suspects, but there is little evidence to go on.

If you have any further information please contact the Irvington Police Department at 973-399-6603.