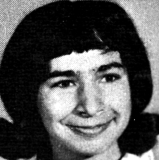 Rosemary Calandriello was 17 years old when she was last seen walking out of her family’s home in the 90 block of Center Avenue in Atlantic Highlands, New Jersey at 6:00 p.m on August 25, 1969. Her mother gave her two dollars and sent her out to the store to buy milk and ice pops for the family’s dinner. The store was only two blocks away, and Rosemary was expected to return home after only a few minutes. But she never arrived home. Her mother reported her missing to authorities about two hours after she was last seen.
Rosemary was the youngest of four children and the only child still living at home with her parents. She had only recently started dating, had no steady boyfriend and she was generally kept sheltered by her family. She was not allowed out at night by herself, and she was afraid of the dark.
At the time she vanished, Rosemary’s father was very ill and had to take leave from his job as a result. Rosemary assumed many more household responsibilities, including shopping for the groceries and helping pay bills due to her fathers sickness. Her parents never believed she ran away from home, as that would be extremely uncharacteristic of her behavior.
During the investigation, police were able to speak to four of Rosemary’s high school classmates who claimed to have seen her riding in a car with a stranger, an older male. They described the vehicle as a beat up black and white Ford Galaxy convertible. The boys followed the car in their own vehicle for a few blocks, because they were curious about seeing Rosemary with an older man.
Based on the boy’s descriptions, the police made a composite drawing of the unidentified man. After this sighting was reported in the newspapers, a woman came forward and told investigators that a man who closely resembled the sketch and drove a similar vehicle had offered a ride to her 12 year old daughter and her daughter’s friend. He made the offer on three separate occasions and had also offered to give the girls some wine. Amazingly, the girls had memorized the vehicle’s license plate number and police determined it belonged to Robert Zarinsky.
Robert had a history of antisocial and criminal behavior dating back to his childhood. And was diagnosed as a paranoid schizophrenic. After linking him to Rosemary’s disappearance, police arrested him for contributing to the delinquency of a minor. This charge was connected to him for offering alcohol to the two underage girls, but police believed he had also harmed Rosemary.
Robert was seen washing the trunk of his Ford Galaxy after Rosemary went missing, something that was unusual. When police inspected the car, the window and door handles on the passenger side were absent. One of Rosemary’s hair clips was found on the floor of the vehicle, and in the backseat was a pair of blue women’s panties. Rosemary’s mother identified the panties as her daughter’s, but Robert Zarinsky’s wife stated they were her own. A ball-peen hammer with skin, dried blood and hair stuck to it was also located. The hair however, was blonde, police later presumed Robert Zarinsky also murdered the blonde haired blue eyed Linda Balabanow (https://ashmysteries.com/2021/08/15/the-murdered-linda-balabanow/ ) along with several other teenage girls in the surrounding area.
After Robert’s arrest, Rosemary’s four high school classmates identified him as being the man they saw with her on the evening of her disappearance. When he was in jail, he allegedly confessed to Rosemary’s murder to a cellmate, and said that no one would ever find her body.
Robert was convicted on the charge of contributing to the delinquency of a minor, but his conviction was overturned on appeal and he was released. The FBI analyzed the bloody clump of hair that was found in the car and it was indeed linked to Linda Balabanow, whose body was found in the Raritan River in Port Reading, New Jersey about four months before Rosemary disappeared. She was beaten to death and strangled with an electrical cord.
Police also suspected Robert had killed Joanne Delardo and Donna Carlucci, two teenage girls from Woodbridge Township, New Jersey who were both also strangled with an electrical cord. (https://www.nytimes.com/1974/12/28/archives/bodies-of-two-girls-apparently-slain-are-found-in-jersey.html ) However, there was not enough evidence to prosecute him in those two cases.
In 1974, Robert Zarinsky was charged with Rosemary’s murder on the basis of circumstantial evidence. He was convicted in 1975 and sentenced to 98 years in prison. He was the first person in the state of NJ to be convicted of murder in a case where the victim’s body had not been found. In 1999, Robert was also charged with the murder of a 13 year old girl named Jane Durra. (https://ashmysteries.com/2021/05/08/the-murdered-jane-durrua/ ) She had been raped, beaten and strangled. He was awaiting trial for her murder when he died of pulmonary fibrosis in December of 2008.
Robert Zarinsky is a suspect in several murders other than the ones he was charged with, and his own sister attributes as many as 10 homicides to him.
Rosemary’s remains have still not been located as of 2021, but foul play is suspected in her case.

If you have any information, please contact the Atlantic Highlands Police Department at 732-291-1212.